The Original Rock Painter, Since 1974 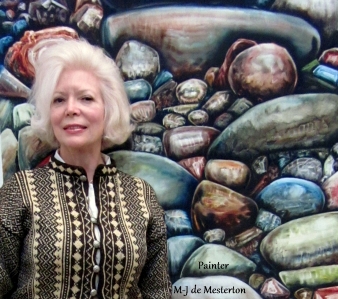 New Article by M-J de Mesterton about her former student in Manhattan: 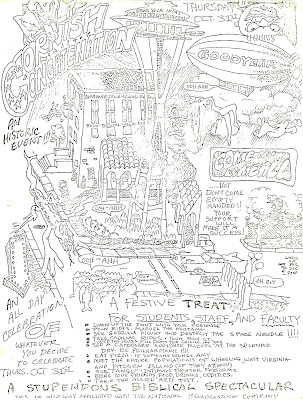 A 1974 drawing by Cornish Fine Art instructor Charles Stokes is just one of the items on my web-page, 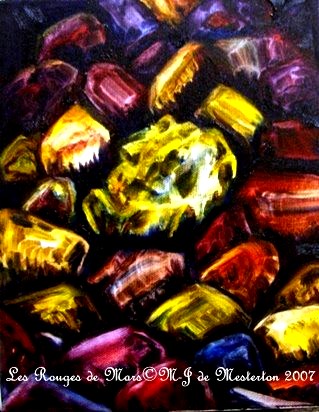 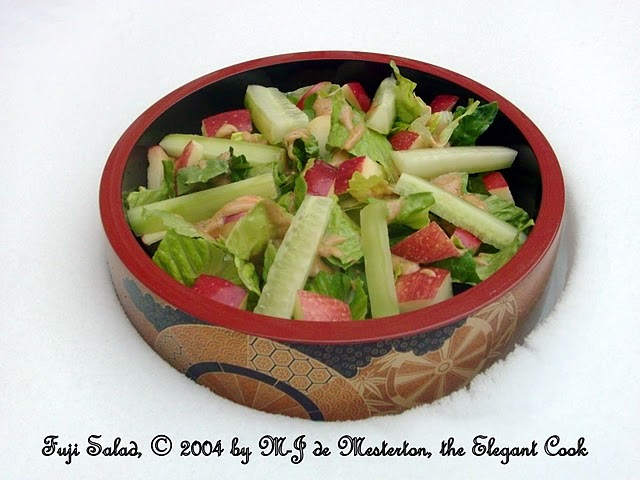 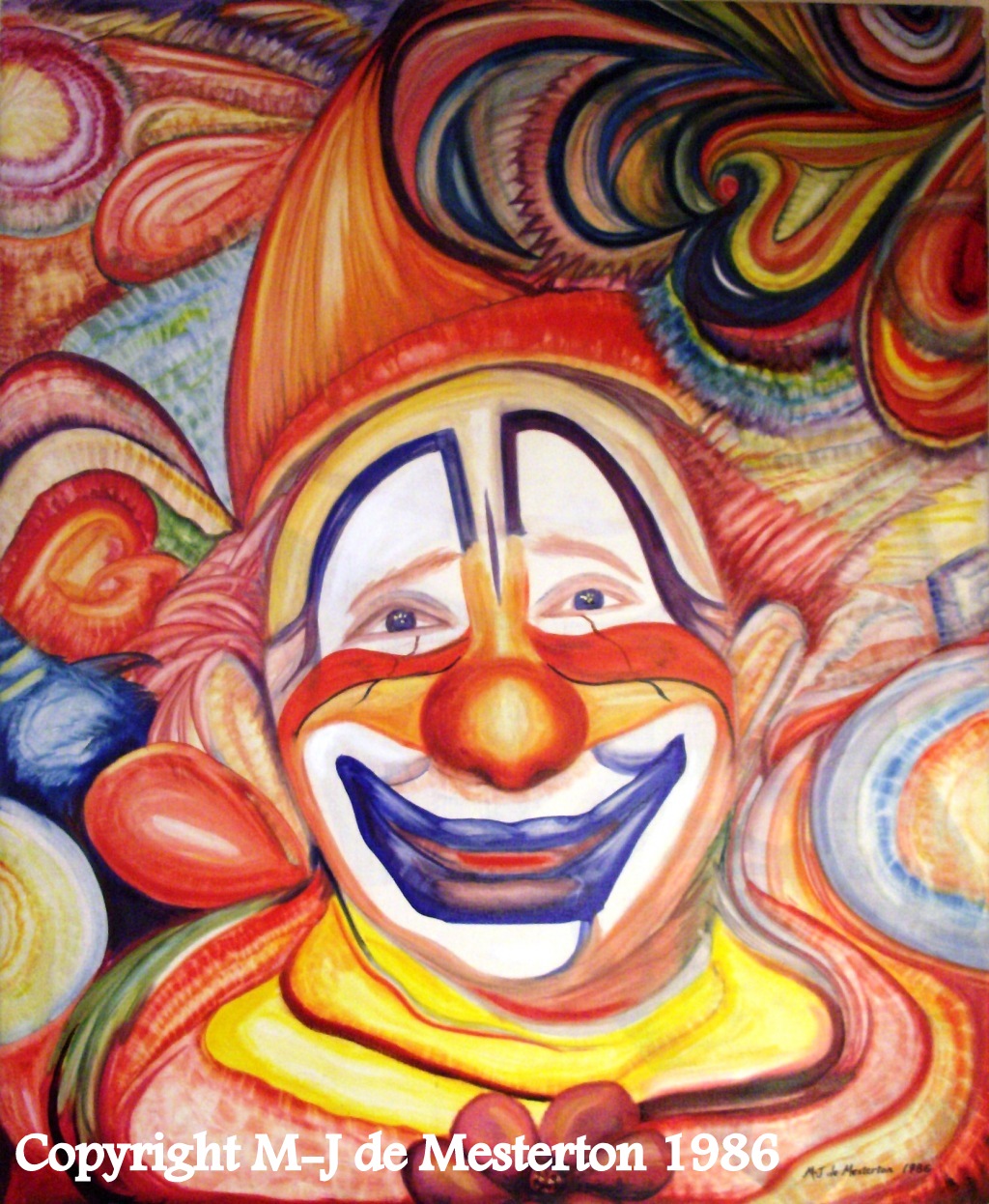 One of the Web's Most Popular Clown Paintings, 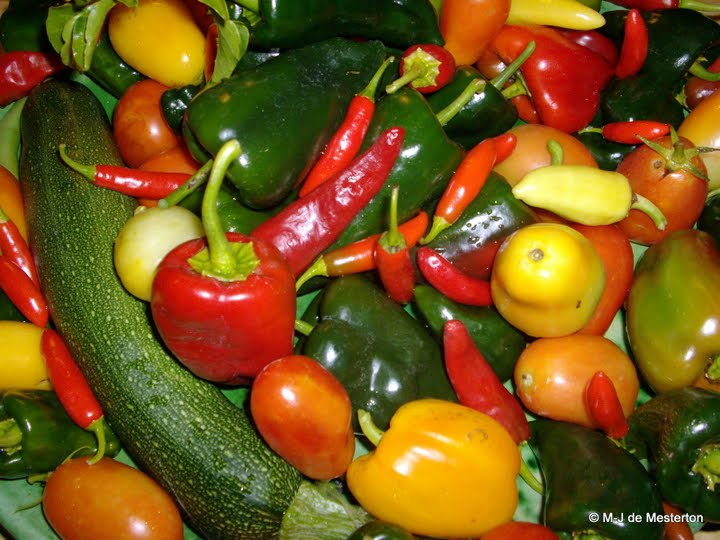 M-J in Her Studio, Arroyo Lindo 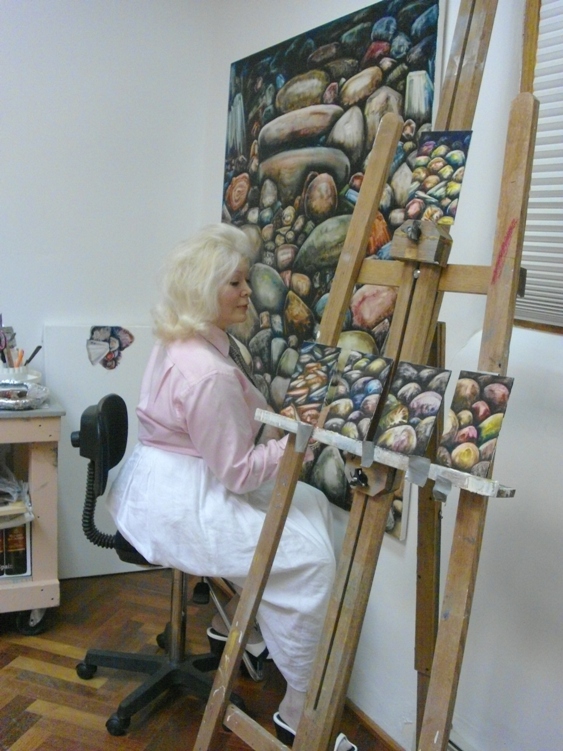 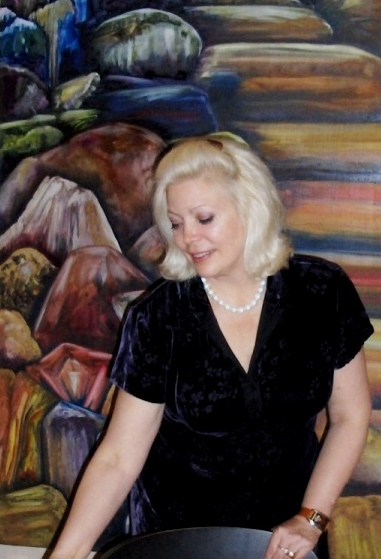 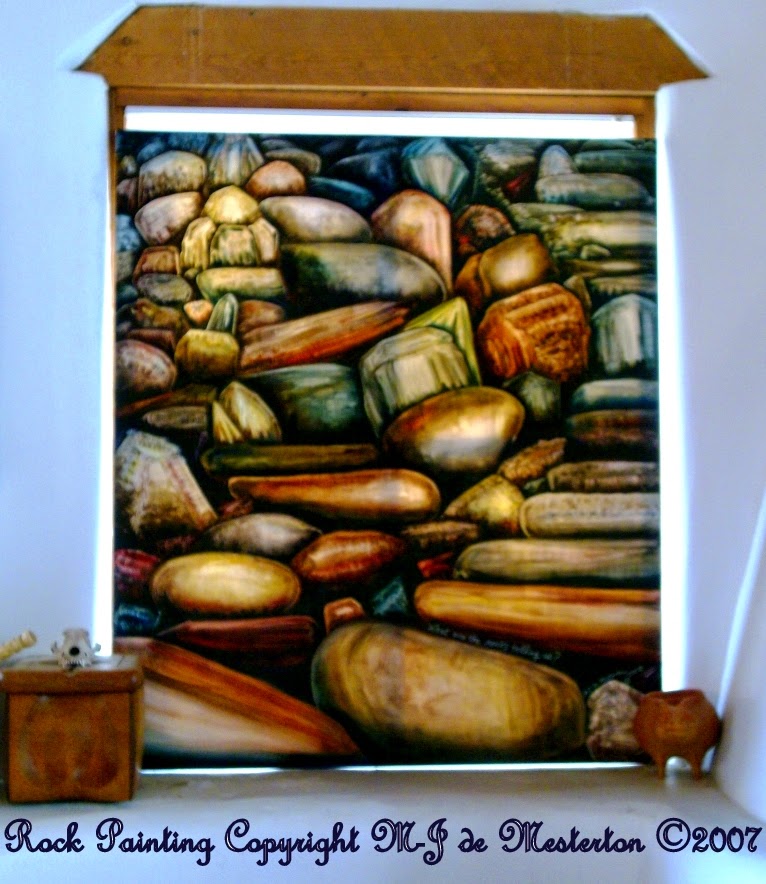 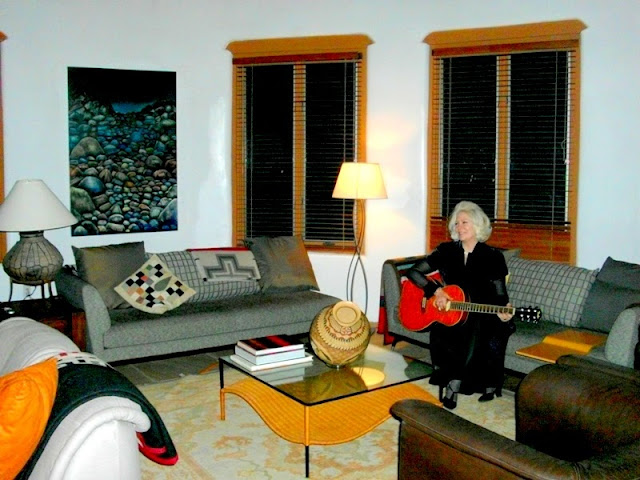 For information on available paintings, please write to the representative. Thank you.

All Works by M-J de Mesterton are protected by international copyright--and some heavy-duty enforcers! 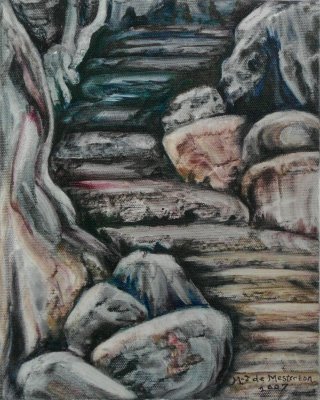 Pictured: What are the Rocks Telling Us?, and El Dorado, Oil on Canvas by M-J de Mesterton, Copyright 2008 and 2007
Rocks, Gems and Crystals of New Mexico 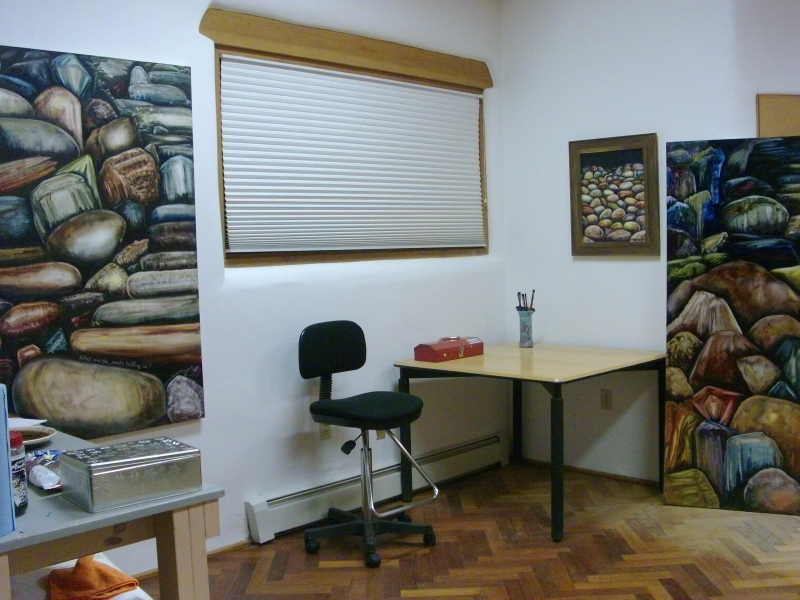 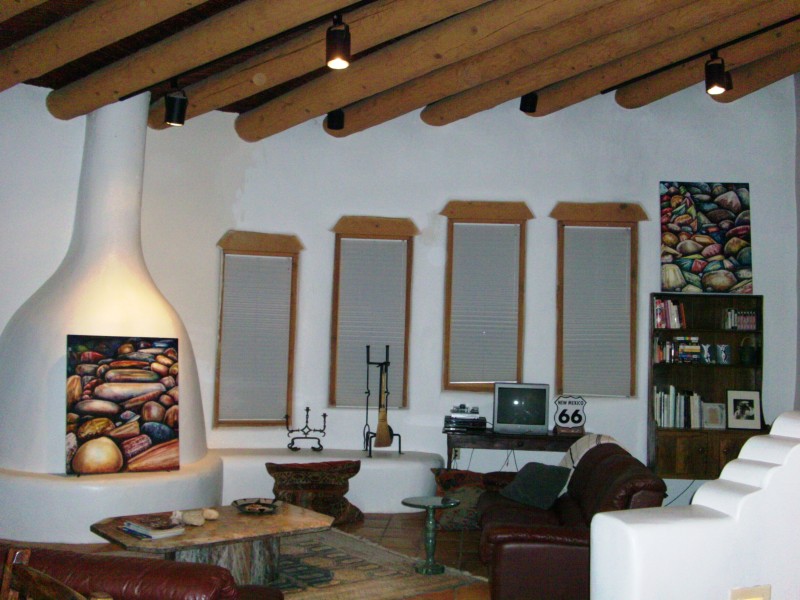 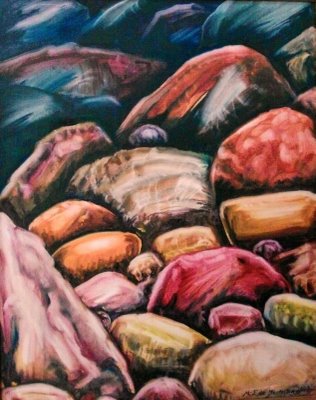 Chile Red Chert, by M-J de Mesterton, The Rock Painter; Copyright 2007
The Following is from the 2008 New Mexico Bluebook, Geology Section
The rocks not only shape our enchanting scenery but also yield clues as to the earthï¿½s wealth. The porous San Andrï¿½s Limestone caps higher parts of the eastern Sacramento Mountains and dips eastward under the Pecos River Valley. Capturing rainwater in the west, the Permian limestone conveys the ground water eastward under the Roswell-Artesia area, to the Pecos valley where it is tapped to irrigate lush fields. Two major basins in the state, the San Juan in the northwest and the Delaware in the southeast, are regions of ancient seasï¿½the habitat of oil and gasï¿½and produce most of the stateï¿½s oil and natural gas. Cretaceous beds include the black gold of coal seams that are tapped by coal mines.
Metallic mineral deposits are in most places associated with igneous rocks, thus the major mining districts for copper, lead, zinc, gold, silver, and molybdenum are in complex areas of extrusive and intrusive rocks, such as near Silver City and Questa. Potash and rock salt are formed in saline basins, which explain their occurrence in the Delaware Basin area east of Carlsbad.

Gold was the lure that drew the Spanish to New Mexico in the 1500ï¿½s, but the Paleo Indians had mined turquoise (our state gem), copper, and some coal many centuries before Coronado. Mineral production in the state is a major contributor to the economy. New Mexico leads the nation in production of potash and perlite and is among the leaders in natural gas, copper, molybdenum, coal, crude oil, uranium and pumice. In addition, the stateï¿½s rocks yield significant amounts of clay, gemstones, gold, gypsum, manganiferous ore, mica, salt, sand and gravel, stone, barite, carbon dioxide, cement, iron, lead, limestone, silver, sulfur, vanadium, and zinc. The total annual value of minerals produced in New Mexico has been as high as $7.2 billion. In recent years the total value of mineral
production, from preliminary data, was more than $5 billion with state revenues about $900 million.

What magnificent benefits geology has given our state ï¿½ and the nation!
The rocks determine sites of many of our cities and villages. Many of our people live along the Rï¿½o Grande rift, the geologic control for the Rï¿½o Grande, which became the focus of trails and highways amid irrigated farms and orchards, flanked by magnificent mountain ranges.
The Tijeras fault is a major break in the earthï¿½s crust and cuts diagonally between the Sandï¿½a and Manzanita Mountains, providing a channel for Tijeras Arroyo and a pass for I-40 from the east.

Forty miles to the west, a lowland along Rï¿½o San Josï¿½, north of Sierra Lucero and southeast of Mount Taylor, allows passage westward for I-40 and the AT&SF Railway. Thus our major city, Albuquerque, is at the intersection of geologically influenced north-south and east-west transportation routes.

Santa Fï¿½, at the foot of the southwestern part of the Sangre de Cristo Mountains, is the site of west-bounding faults of the range that intersect east-west trending breaks followed by the Santa Fï¿½ River. Near the complex intersection, springs and marshes (cienegas) supplied water for early Indian pueblos and the Spanish/Mexicans from 1609 onward.

The geological settings for Las Cruces and Mesilla are similar to Albuquerque. They lie in the
Mesilla Valley of the Rï¿½o Grande, a rich irrigated area, traveled by I-25. Fifteen miles to the northeast, San Augustin Pass provides a natural east-west opening between the long rocky San Andrï¿½s Mountains to the north, and to the south the rugged Organ Mountains with their majestic spires of igneous rocks, called the Organ Needles. Off to the west, the east-west US 70 and I-10 follow a broad, low plain between the Sleeping Lady Hills and Sierra de Las Uvas to the north and the basaltic rocks of the Potrillo Mountains to the south. The intersection of Camino Real "de Tierra Adentro" (King's Highway to the Interior Lands) north-south, with the east-west transcontinental highway (and railroad), locates Las Cruces.
Carlsbad is at the springs, along the Pecos River near where it crosses the buried northeast limb of the Capitï¿½n Reef complex of cavernous limestone. Roswell and Artesia, further up the Pecos Valley, are near intersections of larger streams, draining eastward from the Sacramento Mountains to join the Pecos. Ratï¿½n is south of Ratï¿½n Pass, route of the AT&SF Railway and I-25. It is a canyon carved through the Mesozoic sandstones, west of the basalt-capped Ratï¿½n and Johnson Mesas.

Farmington lies at the confluence of three rivers, the San Juan, Animas, and La Plata that drain the La Plata and southern San Juan Mountains Socorro, on the west edge of the Rï¿½o Grande Valley, is near springs fed by faults along the east flank of the Socorro Mountains.

The scenery of our Land of Enchantment is most obviously geologically controlled. Badlands are omnipresent in soft rocks such as the tertiary sandstones and siltstones along the Rï¿½o Grande from Espaï¿½ola and Pojoaque south to Las Cruces and Sunland Park, or the multicolored Cretaceous and early Tertiary beds of the San Juan Basin at Bisti, Angels Peak, Huerfano Mesa, and near Lybrook.

The Healing Power of Rocks, Crystals and Gems

From Dr. Joseph Mercola: In Pain? Try a Dose of Beauty

A research team asked 12 men and women to pick the 20 paintings they considered the most ugly and the most beautiful from a selection of 300 works by artists such as da Vinci and Botticelli. They were then asked to contemplate either a beautiful painting, an ugly painting, or a blank panel while the team zapped a short laser pulse at their hand, creating a pricking sensation.

Distractions are known to reduce pain in hospital patients, but this is the first result to show that beauty plays a part.